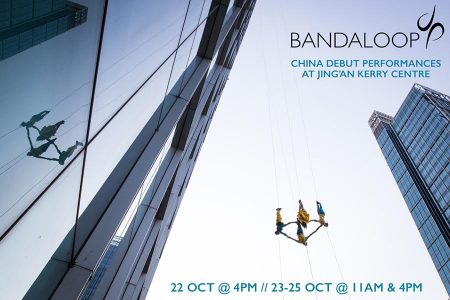 Bandaloop’s core mission is to bring dance to new audiences. We felt that the mission was accomplished with a live broadcast to a potential 1.4 billion people across CCTV1, China’s biggest broadcaster. Daily audiences were in the thousands, over eight performance days and 15 total performances. This debut in China positively impacted Bandaloop as an organization but most importantly, as a precedent-setting public art feat never before accomplished in China. Dancing on the city walls of the most populated city in the world Bandaloop embodied the statement “the sky is not the limit” – creating infinite possibilities through unconventional means.

The China Shanghai International Arts Festival presented Bandaloop as its flagship public performance activity for the Festival’s 17th season. Bandaloop did 15 performances on the side of a 100 meter skyscraper in the Jing’An Kerry Centre. The first performance was a media event marking the opening of the Festival, and was therefore broadcast to the world on CCTV1 via the Shanghai Media Group’s seven-camera coverage of the event. Bandaloop also conducted two lecture / panel discussions in locations organized by the US Consulate Shanghai, one at the Ta Bu Dong Community Center and the later at the Shanghai American Center. The company also attended multiple receptions hosted by the festival. Exposure locally and across media platforms was tremendous, and continued over the two weekends of performances.

It is worthy of note that Bandaloop company members universally experienced a wide diversity of audience members, intended and incidental, in awe of not just the dance and the beauty but that this was put on display in Shanghai, on the streets of China. The fundamental social mission to bring public art to the people seems to be a worthy goal and one that was well received in the Shanghai from the shopper to the business professional, across Jing’An and across China this message is now rippling outward.

Audiences numbered in the thousands at each of the 15 performances. Audience members were allowed on the closed off streets below the Jing An Kerry Centre and on the sidewalks surrounding the performance area plaza. Additional audience reach was through TV coverage and online presence, and felt throughout the world given the breadth of exposure on CCTV1. The two panels were also well attended, one at 35 people and the second at close to 65. In addition, Bandaloop had the opportunity to visit rehearsals at a local Jingju troupe and the Jinxing Dance Theatre, and invited those dancers to the Bandaloop performances. Local Chinese cultural notables; composer Tan Dun, dancer Huang Doudou, designer Tim Yip, and photographer/performance artist Maleonn attended Bandaloop performances and interacted with the group.