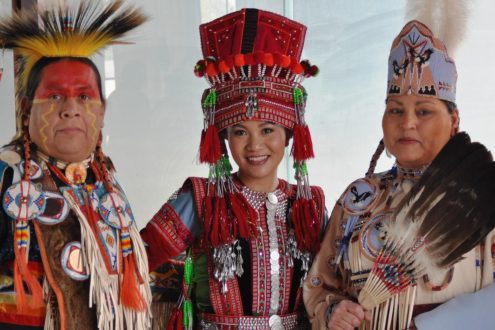 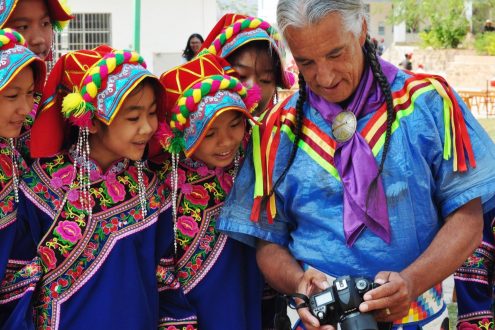 From 2012-2016, Barbash Arts Consulting toured traditional performing artists from the Navajo, Lakota, Comanche and Anishinaabe Nations throughout various territories in the People’s Republic of China. These artists have performed for and interacted with Chinese citizens from all socio-economic classes, and in locations ranging from a remote rural villages in Yunnan, the mines and grasslands of Inner Mongolia and (Harbin region) (where they were the first foreigners ever to visit the village) to China’s premiere performing arts venue in Beijing. These programs have also reached a wide variety of schools, from those serving the children of migrant workers to those of China’s Air Force officers, from Han students to Yi, Wa and other ethnic minorities in Yunnan, Inner Mongolia and (Harbin area). Programs included song, dance, storytelling, flute playing, audience instruction/participation, including dance and question/answer periods, as well as demonstration of traditional crafts. Presentations included discussion of the challenges of keeping traditions alive in a contemporary society, the artists’ efforts through classroom teaching and participation in traditional ceremonies in their communities and elsewhere, and recording CDs, to revive their languages (Lakota, Comanche and Anishinaabe), music, crafts and customs. Further, Kevin Locke’s hoop dance included also a narrative explaining the meaning of the dance that incorporated universal life lessons.

Throughout the exchanges, it was clear that the Native American performers learned about Han and ethnic minority cultures as well. Students performed for them, and questions and answers were exchanged not only during formal sessions but also during day-to- day activities. They very quickly recognized the kinship of the Native American and Chinese cultures, and took endless delight in recognizing both the physical and material cultural similarities of their peoples.

In September 2016, Barbash Arts Consulting will expand this program into Cuba through a week-long residency hosted by the Estudio Teatral and Teatro La Rosa in Santa Clara.